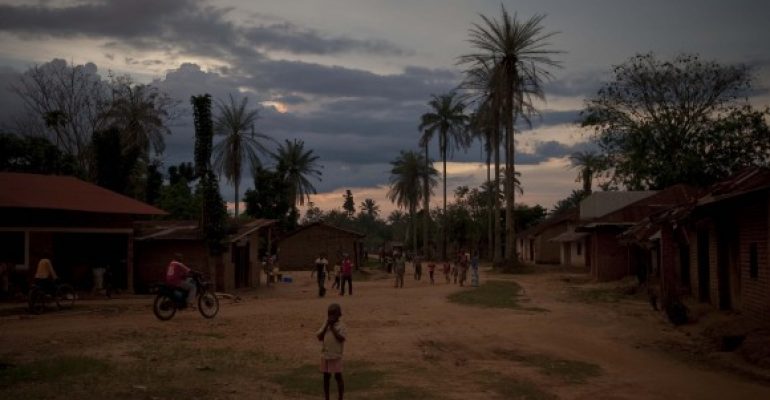 The province of South Kivu, which borders Rwanda and Burundi, has been the stage of armed conflict for many years. In the absence of the DRC armed forces (FADRC), parts of the population mobilized to form a self-defence force called Raia Mutomboki, after remnants of the Interhamwe forces, who were involved in the genocide in Rwanda, moved into the region. However, one problem was substituted by the other, since no one could now control the self-defence force. In 2013, the Shabunda territoire established ‘permanent peace committees’, in an effort to return peace to the community.

Shabunda is a large territoire located in the remote jungle of Eastern Democratic Republic of the Congo. After the genocide in Rwanda, remnants of Interahamwe forces fled into bordering DRC, gathering under the name Democratic Forces for the Liberation of Rwanda (DFLR). In the remoteness of the South Kivu province, the FDLR committed many atrocities against the local population, while the FADRC were largely absent. In order to protect itself, parts of the local population established a self-defence force that successfully forced the armed group out of South Kivu. Once the military started to become more present in the region, a new conflict was started between the FADRC and the Raia Mutomboki.

In order to stop the violence and restore government authority in the area. The local authorities in Shabunda established ‘permanent peace committees’. Their aim was the demobilization of Raia Mutomboki and the reintegration of its fighters into society. Then, when this was achieved, the government’s authority could be restored in the region. Ultimately, it was hoped that bringing back peace would on the long term contribute to ending the isolation of Shabunda and the surrounding area, and stimulate development.

In order to facilitate the demobilization of combatants, an awareness-raising campaign was initiated by the committees in districts, villages, groupements and chefferies. The committees, which actively encouraged combatants to lay down arms, were composed of representatives of the local administration, the government, civil society and also included prominent local individuals and family members of Raia Mutomboki warlords. The awareness campaign was supported by the army and police, who used the local radio station to encourage disarmament as well.

Because of the local context, the committees faced quite some challenges in their efforts to restore peace. However, the UN mission to the DRC (MONUSCO) helped with the safe transportation of combatants who surrendered, and through the provision of food supplies. Another problem was the common practice that regardless of peace having returned, victims of atrocities would ‘settle accounts’ on their own terms, with the risk of a re-escalation of violence. To address this problem, the permanent peace committees actively encouraged peaceful reconciliation.

The initiative of the territoire of Shabunda was very successful. Despite difficulties, peace has been largely restored in most of the Shabunda area and many combatants have surrendered, including the Raia Mutomboki’s leader. Some applied to the National Disarmament, Demobilization and Reintegration Program. The programme included awareness raising to prevent the public from settling accounts with combatants who had surrendered. Although Raia Mutomboki has not been disbanded altogether, and fighting continues in some places, peace is certainly one step closer.