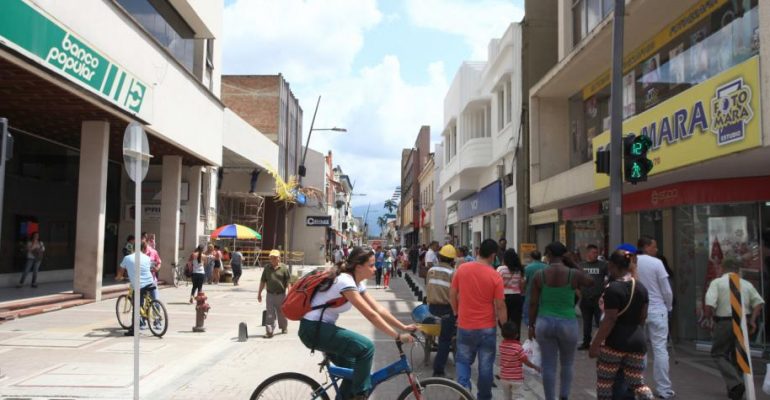 Although initially a small-scale initiative, the project called Palmira tu Voz es Paz (‘Palmira your Voice is Peace’) was able to grow into the city of Palmira’s flagship initiative in the fight against crime, drugs and violence that had troubled the city for years. With a focus on music and self-expression, the project aimed to help Palmira’s youth to make the right choices and resist attraction to violent and dangerous lifestyles. Its success shows that music can be a very strong instrument in the fight against violence, which contributed to the jury's decision to select Palmira as a finalist for the UCLG City of Bogotá Peace Prize.

21After the city reached a population of 300,000, the situation in much of Palmira (Colombia) deteriorated quickly. Poverty, drug-trafficking and –addiction pulled many children and young adults into violent lifestyles, causing a strong growth in crime rates. At one point it was even considered the country’s most dangerous city, ‘beating’ Bogotá and Medellín.

At the beginning of 2016 the project Palmira tu Voz es Paz was launched. Through the organizing of a music competition, the project aimed to promote self-expression through song and dance, among the children and young adults in the most dangerous areas of the city. The competition put a strong emphasis on positivity and the participants were thus stimulated to let themes such as peace, family and a life free of crime into their music.

The competition lasted for six months. During the first few months, the project organizes all kinds of social activities for children and young adults to participate in, such as sports activities or the donation of school equipment. During the second phase, qualification rounds are accompanied by cultural activities, such as painting sessions by graffiti-artists. In this stage, the project was also able to enrol some 50 children and young adults into the local culture institute, for free training in self-expression through music and dance.

Although the project initially had trouble to find support and acquire the necessary resources, good management and resilience allowed the project to continue. Fortunately, the initiative was received with much enthusiasm within the target communities, and the project could increasingly count on the support of the Municipal Council. Over time, more and more departments of the local authorities started to contribute to the project, allowing it to grow into an indispensable part of the city’s effort at improving its living conditions.

Now, the competition is supported by the police force and the army for security and a team of psychologists and the city’s social service, that contribute to the social aspects of the project, such as improving the familial relationships of children and reintegration. Due to its large success, the project has also been able to attract famous Colombian artists to perform, and act as a source of inspiration.

Although not the sole work of the project, in recent years, the number of violent deaths and robberies has decreased significantly and there is no doubt that Palmira tu Voz es Pazcontributed to this achievement of the city.

Click here to see a clip of auditions for the music contest. This youtube channel also features more videos of the initiative.