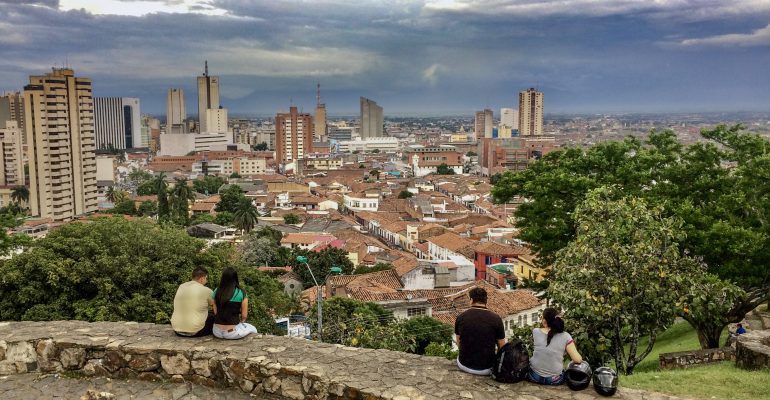 As the third largest city of Colombia, Cali receives many internally displaced persons that flee the countryside as a result of the ongoing conflict between the Colombian military and various armed groups. These victims of war consist of both civilians and demobilized combatants. In any case, they are likely to have suffered from traumatic experiences, which can cause them to have difficulty in integrating in the new environment. With the support of the Cali government, three projects, under the overarching name Medítele al a Paz (‘Think about Peace’) help people, most notably children, to keep violence at distance.

Most large cities in Colombia accommodate substantial amounts of internally displaced persons. Cali is one of the main recipients of these victims of war. However, building a new life in the city can prove difficult, because of poverty, high crime rates or because people have had traumatic experiences of the violent conflict that has been going for decades. Furthermore, it can be constraining on the host communities. Of the three largest cities of Colombia, Cali for a long time has had the highest rate of homicides. Therefore, the city government has since 2014 embarked on a comprehensive campaign to promote peace and reconciliation. The Asesoria de Paz, a peace advisory body, presented three initiatives that were to contribute to the reduction of violence in the city of Cali.

‘Disarm, think about this Story’, is a publication in which children use creative writing to tell their stories about war. Children in vulnerable neighbourhoods of Cali were then asked to turn in their war toys in return for a copy. Writing and reading about experiences of violence was aimed at helping children to process traumatic experiences and raise awareness, while the ‘disarmament’, the handing in of war toys, would help them to leave images of violence behind. The publication reached many children and has been reprinted seven times, with the support of several other organizations.

The second initiative, called ‘I was not born to die’, is a programme in which parents and other caregivers receive workshops that strengthen parenting skills, with a focus on peaceful solutions to inter-relational conflicts, from a gender-based and conciliatory perspective. This project identifies the ill-treatment of children by their parents, as an important cause for their engagement in a lifestyle of violence. Helping the parents, means helping the children.

Finally, the Asesoria de Paz organized workshops called ‘Peace Facilitators’. These workshops were aimed at training civilians to act as social workers within the vulnerable communities in the city and at schools, equipped with the skills to promote coexistence and conflict resolution, in order to relieve tensions within these communities. Approximately 600 peace facilitators were trained under the initiative.

Fortunately, all three projects are now integrated within the city’s new development plan, for the 2016-2019 period. Because the project has a very long reach, with the ability to affect many households in the city of Cali, and because a peaceful settlement between the national government and the FARC is still coming closer, ‘Think about Peace’ can play a key role in reaching sustainable peace.