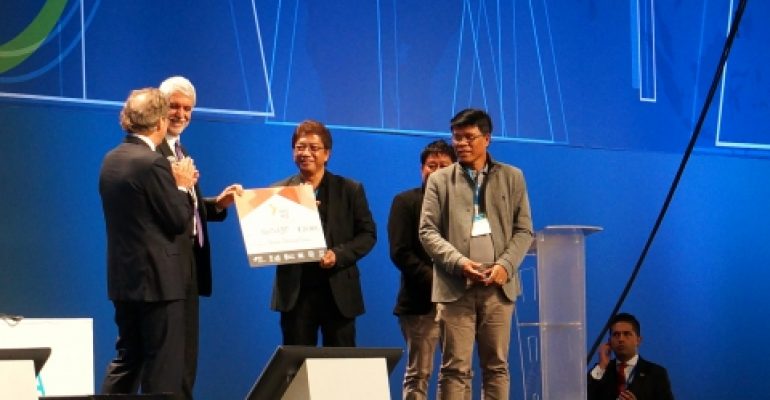 Courageous leadership and the ability to connect peacebuilding to socio-economic development are among the merits that make the municipality of Kauswagan in the Philippines the winner of the first UCLG City of Bogotá Peace Prize! The award ceremony took place as part of the UCLG General Assembly on 14 October in Bogotá. The ceremony was opened by Mayor of Istanbul and UCLG President Kadir Topbaş, and presided by Mayor Ton Rombouts of 's Hertogenbosch, Vice-President of the UCLG Committee on City Diplomacy and Development Cooperation. Mayor Enrique Peñalosa of Bogotá handed over the award to Mayor Rommel Arnado, who received it on behalf of Kauswagan municipality.

Kauswagan is a municipality in the Lanao del Norte province of the Philippines, which since the 1970s has been the stage of the Moro conflict between an Islamic secessionist insurgency and the Philippine Army. In 2010, the Kauswagan local government started a project to fight the root causes of the conflict, which were poverty, food insecurity and inequalities between population groups, notably Muslims and Christians. Called ‘From Arms to Farms: Walking through the Paths of Peace’, the project proved very successful in addressing these issues. A description of the project can be found in this article.

All finalists presented their initiatives at a special session on 13 October as part of the UCLG Congress. The finalists comprised a diverse range of innovative peace projects by local governments. The local government in Canoas, Brazil, combines initiatives in technology, social inclusion and community policing to address causes of violence in target areas. Meanwhile in Colombia, the city government of Cali organises workshops for children and parents while training community mediators and social workers to promote peace in the community. In the same country, the municipality of Palmira hosts its Palmira, tu Voz es Paz urban music competition to raise young people’s awareness of the importance of living together peacefully. Located in a remote area of the eastern Democratic Republic of Congo, the local authority of Shabunda created Permanent Peace Committees to establish peace, restore government authority, reintegrate members of a local militia into the community and end the area’s isolation.

The jury particularly commended the municipality of Kauswagan for moving beyond addressing the symptoms of violent conflict towards a socio-economic approach that bridges peace and development. A detailed jury report with feedback about all the finalists will be published on this website shortly.

As a recognition for their inspiring work, the municipality of Kauswagan receives an award of €20.000, aimed at strengthening their initiative. Furthermore, the municipality is invited to present the project in the Netherlands in 2017.

More details about the Peace Prize events, the speakers and the award ceremony will be shared on this website shortly.