“Every conflict starts with poverty and hunger” 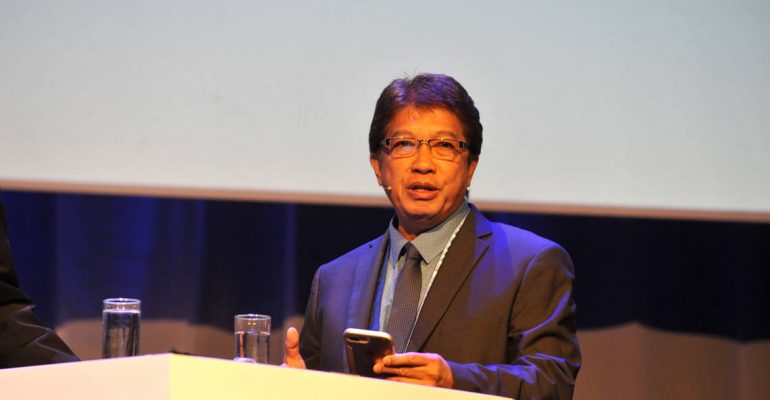 Those were the words used by mayor Rommel Arnado of Kauswagan when he addressed the annual congress of the Association of Netherlands Municipalities (VNG). As the mayor of the local government that won the first edition of the UCLG Peace Prize, he was in the Netherlands on invitation of the VNG to share his experience on dealing with conflict between different groups in his municipality. In front of over 2000 Dutch mayors and aldermen, mayor Arnado was interviewed by the host mayor of the congress René Verhulst of Goes Municipality.

What was the effect of the winning of the UCLG Peace Prize on your municipality?

‘It is the best what could have happened to the From Arms to Farms programme and proof that we are on the right track. Although our programme was aimed at the rebels of the Mindanao Islamic Liberation Front, other municipalities and regions where, among others, communist rebels are active are now very interested in our approach. Since the award of the Peace Prize in Bogotá I have received a lot of invitations from all over the world to come and tell about our programme. Unfortunately I cannot honour all invitations, as my first and foremost responsibility are the people of Kauswagan municipality.’

Can other municipalities with different problems learn from your approach?

‘It is my deepest conviction that all tensions between different groups in society originate from poverty and hunger. If we manage to banish poverty and hunger from the world, the refugee crisis would be solved. What is currently happening in Marawi-city [the city of Marawi has recently been overtaken by Islamic State rebels and during this conference the Filipino army was fighting to set it free] is caused by the lack of basic services. There is no water, no basic roads and mismanagement. The water on which agriculture depends there is neglected and soiled. I am currently working on a concept of how to make sure good mayors are elected, which would then need to be legislated. I believe that electing good mayors is the most important thing to solve the problems, more so than electing good national representatives.’

‘I am not asking for money to help us. In Kauswagan we managed to develop ourselves from a backward municipality to the best in the region. That is why I want to make our program more known in the Philippines. Currently it is more popular abroad then domestically; that has to change. I want to make sure that Filipino municipalities can make similar programmes to fit their own situation using the From Arms to Farms program as an inspiration. That is where I can use your help: involvement, the sharing of knowledge and solidarity are important to us! We can learn so much from each other, and the Netherlands is so organized. I have already learned a lot from my trip here by visiting several municipalities, a university and of course by talking with fellow mayors at this congress.’

To learn more about the Peace Prize and the From Arms to Farms project, please watch this short video.